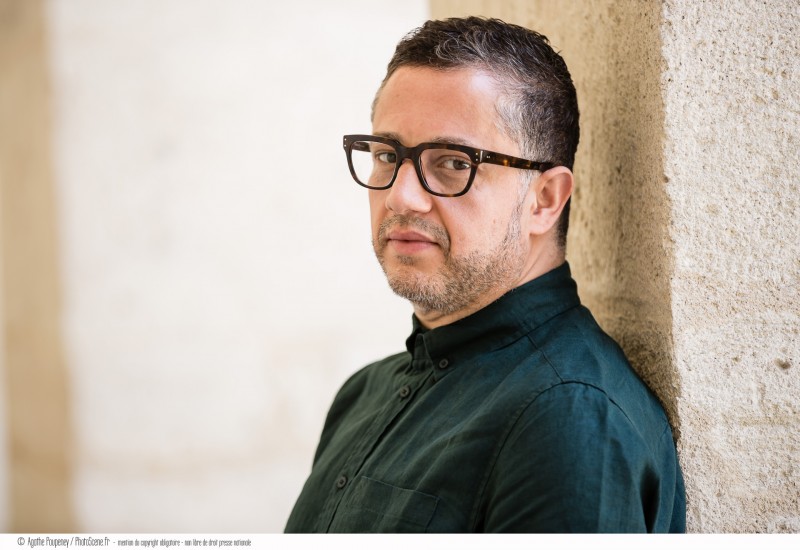 Trained at the Higher Institute of Dramatic Art of Tunis, he is recognized as “The young hopeful of the Tunisian theatre” in 1996 by the Tunisian Section of the International Theatre Institute. He is, then, recruited as an actor within the training and research workshop of the National Theatre of Toulouse under the direction of Jacques Rosner. In Tunisia, he works with Fadhel Jaibi, Taoufik Jebali and Mohamed Driss, highly influential artists in the Arab world. In France, he works with the directors Jacques Rosner, Lotfi Achour and Catherine Boskowitz, and he collaborates artistically with contemporary authors such as Natacha de Pontcharra, Adel Hakim and Camille de Toledo. As a movie actor, he appeared in two films by Férid Boughdir, Un Eté à la Goulette / A Summer at La Goulette and Halfaouine, l’Enfant des Terrasses / Halfaouine, The child of Terrace Roofs.

Throughout those years devoted to the theatre, he worked in the same time with Tunisian choreographers, as an interpreter and an artistic collaborator. Being quite fond of dancing, he is equally nurtured by classes directed by Lisa Nelson and Jean Laurent Sasportès in Europe.

Because he felt the need for an artistic experience other than the theatre, he signed for his first creation in 2005, a solo dance entitled Pour en finir avec MOI / To finish with MY SELF, as an intimate introspection and a vital experience. A real revelation that will make him go into dancing and become a choreographer-interpreter. Once performed at the Rencontres Chorégraphiques de Carthage / The Choreography festival of Carthage, this show has identified by professionals, a turning point in his career. Then, he signed several creations in France, beginning in the following year, with his solo dance Huwa, ce lui / Huwa, that one for Montpellier Danse 2006.

In 2007, he joined the casting of 1000 Départs de Muscles / 1000 Starting Muscles, a creation of Héla Fattoumi and Eric Lamoureux.

In 2008, he presented his creation Quelqu’un va danser… / Someone’s going to dance…  at the International Choreography Festival of Seine-Saint-Denis. In the same year, he created Je danse et je vous en donne à bouffer / I dance and give you food at the Centre National de la Danse in Pantin (CND / The National Dance Center).

In 2008 and 2009, Radhouane El Meddeb participated to Corps produit, corps productif / Produced body, producing body, held by the International Choreography Festival of Seine-Saint-Denis and to Mon corps, mon lieu / My body, my place, supported by the Fondation Culture et Diversité. These workshops attempt to raise awareness of contemporary dancing and to transmit choreographic composition to a large audience, bringing together young people coming from Zones d’Education Prioritaire (Areas of Priority Education), women members of neighborhood associations and also elderly people.

In 2010, he created his first group show, at the CND, Ce que nous sommes / What we are, with five dancers, which has been on tour in France for two years. In December 2010, he collaborated with Stéphane Gombert in Chant d’amour / Love Song, a creation about a novel and a film by Jean Genet, which they performed at the Collectif 12, Mantes la Jolie. The creation process begun as early as 2009, at the Babel Theatre in Beirut, with the support of the French Cultural Center.

Starting from January 2011, Radhouane El Meddeb became an associate artist at the CENTQUATRE-PARIS. A l’Etroit / In a narrow situation is created there in March 2011, a creation initiated by the festival concordan(s)e and in collaboration with Philip Adam.

In the same year, he directed the performance Tunis, January 14 2001 at the Beirut Art Center in Lebanon on the occasion of the Meeting Point 6.

In July 2012, at the Montpellier Danse Festival, he created and danced the solo dance Sous leurs pieds, le paradis / Under their feets, the heaven, whose choreographic composition is shared with Thomas Lebrun. In 2012, he is invited by Matias Pilet and Alexandre Fournier to choreograph the nouveau cirque duo Nos limites / Our limits, created in 2013 at the CENTQUATRE-PARIS. In parallel with his creations, Radhouane El Meddeb is designated as a reporter for scenography, direction and choreography for the jury in charge of the selection of pensioners of the French Academy in Rome for the years 2012 and 2013.

In 2014, he created a new group show Au temps où les Arabes dansaient… / In the days when the Arabs were dancing… a performance for 4 dancers, within the International Festival CDC Toulouse and région Midi-Pyrénées and at the CENTQUATRE- PARIS.

In 2015, with the support of the National Monuments Centre and in the frame of the first edition of the event Monuments en Mouvements / Monuments in Movements, Radhouane El Meddeb presented the premiere of Heroes, prelude, performance for 10 urban dancers, at Pantheon in Paris, which hosted contemporary dance for the first time. In June 2015, he’s invited by the College of Dance Biennale in Venice, he choreographed Nous sommes tous étrangers / We are all Foreigners at Campo San Trovaso, with Italian interpreters.

In 2016, Radhouane El Meddeb continues the work with interpreters of Heroes prelude. The premiere of this new creation called Heroes is presented at the Festival of Marseille – Dance and Arts Multiples 2016. He also creates the solo A mon père, une dernière danse et un premier baiser / To my father, one last dance and a first kiss that is presented at Montpellier Danse 2016.

In November-December 2016 he creates a group piece in Los Angeles, USA, with local performers, O Solitude, My Sweetest Choice, for LACE (Los Angeles Contemporary Exhibitions), commissioned by curator Shoghig Halajian. In 2017, out of his wish to transmit and share his experience, he give a series of master classes in Havana, Cuba, as part of the project Investigación y escritura coreográficas Danze en Construcción.

Since 2017, Radhouane El Meddeb has been a member of the « dance committee » for the Beaumarchais – SACD grant.

In July 2017 he creates at the Cloître des Carmes, for the 71st edition of the Festival d’Avignon, a group piece for 7 dancers, 1 actor and 2 musicians, Face à la mer, pour que les larmes deviennent des éclats de rire (Facing the Sea, for Tears to Turn into Laughter).

For the 2018/2019 season, the choreographer created one Lac des Cygnes / Swan Lake with the ballet of the Opéra national du  Rhin (32 dancers), the Premiere took place on January 10th, 2019 at Opéra de Strasbourg, and then performed, among other venues, at Chaillot – Théâtre national de la danse – Paris in March 2019.
Also, he created AMOUR-S / LOVE-S, a trio inspired by the poem « When love beckons you, follow it » by the Lebanese artist Gibran Khalil Gibran.

On February 2nd, 2020, the MAC VAL – Museum of Contemporary Arts of Val-de-Marne invited Radhouane El Meddeb to create, in situ, a choreographic performance for six dancers, Les danses de TRANS / HUMANCE, in resonance with « TRANS / HUMANCE », Temporary exhibition dedicated to the work of the Turkish and feminist artist Nil Yalter.

In 2021, he premiered REQUIEM, Sià Karà at the Bolzano Danza Festival, with Italian composer Matteo Franceschini, a piece performed by Cuban dancers from MiCompañia, directed by choreographer Susana Pous Anadon. On the occasion of the centenary celebration of Camille Saint-Saëns’s disappearance, Bolzano Danza also commissioned him and Radhouane El Meddeb created Les Cygnes sont morts! / Swans are dead !  based on the music of the Swan, thirteenth movement of the “Carnival of the Animals”.

On August 26 and 27, 2021, at the Marseille Festival, Radhouane El Meddeb created with Malek Sebaï Nous serons tous dévorés par le feu / We will all be devoured by fire, a duet for a dancer and a pianist, with the participation of the Tunisian visual artist Héla Ammar.

In September and October 2021, the choreographer takes over the exhibition « Picasso-Rodin » at the Musée national Picasso – Paris and offers a piece for 4 dancers and 1 pianist, Fragments d’AMOUR-S, from his choreographic look at the two visual artists and echoing his piece AMOUR-S, when love beckons you, follow it …